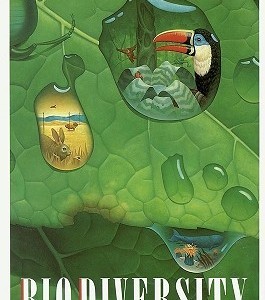 Over 30 years after publication this is still a great collection of essays. I was pleasantly surprised and had my own horizons expanded by the breadth of views on biodiversity they cover – for example, the genetic diversity behind modern monoculture crops like corn, genetic diversity at risk of being lost.

I particularly enjoyed the short reflection by William R. Jordan III on the long experience of ecological restoration at the University of Wisconsin-Madison Arboretum (going back to the Great Depression and Aldo Leopold’s work). Especially since my practical work is mostly around ecological restoration in one way or another. “What good is restoration?”, Jordan asks. “Is it likely to prove merely an academic pursuit or a pastime for environmentalists who happen to be interested in an unusual form of gardening?” Which is a fantastic way to put the question and the tentative answers that follow are also very sharp.

And of course many of the articles are equally thought-provoking. The section on economics, outside my academic expertise (but an area which I have done some reading on) also presented a valuable range of views to consider.

One thing I find annoying crops up in some of the articles, the assumption that human population growth is a driver of ecological degradation. Paul Ehrlich, who of course is famous (outside his ecological work) for promoting this view, opens up his chapter with the observation that “The primary cause of the decay of organic diversity is not direct human exploitation or malevolence, but the habitat destruction that inevitably results from the expansion of human populations and human activities.”

Granted, Ehrlich includes “human activities” as well as population. But the commonality of biologists attributing ecological degradation in some part to human population growth is ongoing now: David Attenborough, Jane Goodall and other prominent biologists and ecologists often mention it. The debate about the usefulness of this attribution has been going on since at least the 1960s and I won’t rehash it all here (read Too Many People? by Angus & Butler for a detailed refutation).

I would like to name the particular attraction of (some) biologists to this theory as The Biologist’s Conceit (or The Biologist’s Folly. Or Fallacy. Something like that). It strikes me that a lot of it comes down to insisting on applying the (completely legitimate) biological concept of carrying capacity to human society. This is technically incorrect, because carrying capacity is only really valid for organisms with a fixed rate of consumption of environmental resources – animals, for example, that live at subsistence. And of course, then, carrying capacity will fluctuate, and populations will rise and fall, as environmental conditions change with climate, season etc.

Human society is no longer at subsistence and has not been for a long time. How we consume environmental resources is not governed by our biology, but by our social organisation, which is not determined by our biology, but rather is an emergent property of it and is far more mutable. This fundamental category error underpins a lot of the other problems with populationist arguments – their historical inaccuracy (Ehrlich’s early dire predictions were proven wrong by experience), and their general uselessness to direct meaningful, humane, non-xenophobic policy (besides that which should be done on its own merits, regardless of effect on population, like empowering, educating and giving a viable income to impoverished women and their communities). Changing human activity is far more effective and meaningful (and less prone to racism and blaming the poor) than trying to engineer changes to our population size.

That is, nevertheless an aside, really – because population growth as a driver of environmental degradation is not actually taken up in any of these articles; I doubt it could be incorporated in a way that would add anything useful; rather it is mentioned as an occasional aside, a shibboleth to be recited more than anything else. The book is, generally, very useful to introduce a very broad range of important topics.

END_OF_DOCUMENT_TOKEN_TO_BE_REPLACED

Since honeybees have started coming into trouble, there has been a bit of popular attention paid to the vital role of pollinators in agriculture. Of course, there are many bees besides the European honeybee, which has unfairly hogged the limelight. Many of our native insects are also valuable pollinators. Having said that, we know a lot more about honeybees than we do about most of the others – it is estimated that there may be about 2000 bee species in Australia, but many are undiscovered and undescribed and certainly un-studied.

Whether it’s for maintaining pollination services to agriculture, or simply maintaining biodiversity in wild populations, we have a lot to learn so it was quite exciting to be able to learn about a couple of native bees in their natural environment doing my honours research in 2017-18. I was actually researching the ecology of the Button Wrinklewort, an endangered daisy species, but it involved studying insect visitors to the plant and making inferences about pollination from my observations. You can read the full paper in the Australian Journal of Botany if you wish (it’s paywalled, sorry), but I’ll reproduce the abstract here: END_OF_DOCUMENT_TOKEN_TO_BE_REPLACED

I spent the Honours year of my science degree researching the ecology of an endangered plant called the Button Wrinklewort. The what??? you may well ask. It’s OK, not many people have heard of it.

It’s a button daisy, that is, one without the large ray-petals on the outside of the flower-disk, so it has a button-like flowerhead. It’s native to southeastern Australia, and was perhaps quite common about 200 years ago in grasslands and grassy woodlands. It is now restricted to a few small and isolated populations in western Victoria, is locally extinct in Gippsland, and still has a few larger remnant populations in and around Canberra. I studied it in the old Truganina cemetery, where it has been fortuitously preserved since the 1800s, in the western suburbs of Melbourne. END_OF_DOCUMENT_TOKEN_TO_BE_REPLACED

Long hiatus since the last blog post… I’ve been watching grass grow, in a most productive fashion (and a few other things… if this lockdown continues I’ll probably find time to blog about them too, notably, my honours research has been published in the Australian Journal of Botany).

I previously blogged about replacing my lawn with native grasses. Theoretically it was to be a native grass lawn, but I don’t cut it that often and with some good rain in February the grasses have been looking more like a jungle. But they weren’t just overgrown, they grew an amazing crop of seed. The weeping grass even put on a summer seed crop in addition to the (fairly paltry) one it produced in spring. And the redleg/redgrass went bonkers too. END_OF_DOCUMENT_TOKEN_TO_BE_REPLACED

In the previous post I made what I thought was a more definitive analysis of the rainfall trends over time. But I think historically and rather linearly it appears, as the charts in that post only looked at rainfall year after year, or as rolling averages.

END_OF_DOCUMENT_TOKEN_TO_BE_REPLACED

28/4/2019: See this addendum for an afterthought which might explain our rainfall better

It seems the autumn break will never come. Days and nights are still warm to hot and rainfall is negligible. Plants that should be growing are sitting in limbo. Animals are getting desperate. I have even taken to watering drought-hardy natives in my garden, worried they might perish otherwise.

Here’s a quick snapshot of the last 12 months’ rainfall (such as it was) from two stations maintained by Melbourne Water, one in the north of town near the Darley golf club, and one just south, near the aerodrome. These are contrasted with the historic 1880-1962 monthly averages, which were measured near the Racecourse.

END_OF_DOCUMENT_TOKEN_TO_BE_REPLACED

I reviewed Charles Massy’s interesting book Call of the Reed Warbler and noted he provides a scientific reference for the contention that it is animals’ mouths, not hooves, that cause land degradation. I read the paper, and want to pick apart just what it shows, in relation to what Massy (and its own authors) say it shows. I think, at least as far as this reference goes, any claim that cell grazing techniques restore biodiversity is not demonstrated by the reference supplied. END_OF_DOCUMENT_TOKEN_TO_BE_REPLACED

Just down the road, how about that.

We usually think to look for grassland remnants along roadsides and on rail reserves on the Victorian Volcanic Plain  Cemeteries are another good place to check out, but have you thought about going to church yard? At St George’s Church Balliang, there is tiny grassland treasure.

I was there on Wednesday chatting with a few people about what to look for and how to manage a remnant such as this one. As with most grassy remnants we need to manage the density of grass cover and this one needs a burn to open it up. Perhaps that will happen this autumn. You never know who has a little patch of grassland out the back. It is lovely to know this patch is in good hands.

Charles Massy takes the reader on a meandering route through seemingly endless case studies of sustainable agricultural practice, mostly in Australia, in the manner of an aimless road trip or a sightseeing wander around a diverse farm. In fact, each chapter begins with him describing a bit about a particular trip to visit an inspirational agricultural innovator, or a walk through his back paddocks, before launching into the substantive matter of the chapter. It’s a slow way to tell a story but the book is worth reading as an introduction to many of the ideas available for making agriculture more sustainable, and the slow style is nevertheless readable and enjoyable.

This is a book of hope. Were I to rate it for the central premise, of making agriculture contribute to healing the world and ourselves, I’d give it five stars. Instead I give it 3.5, (rounded down to 3 – no half stars allowed – on Goodreads) because most other reviewers rated it so highly and I think it deserves a critical review. Critical, because it’s important, and influential, and deserves to be considered carefully — not because it should be ignored or written off. END_OF_DOCUMENT_TOKEN_TO_BE_REPLACED

Re-vegetation has the right aims, but the tools available, and their use, sometimes leave a lot to be desired. I’m thinking about the ubiquitous plastic tree guards, mainly (and a couple of other things mentioned at the end of this blog post). I wonder if anyone else has come up with solutions to any of these problems (leave a comment please! – EDIT: some suggestions are now available in the comments). Anyway since it’s new year coming up, lets make a resolution to reduce plastic pollution from revegetation in 2019.

Tree-guards have a purpose, which they fulfil more or less well, but the downsides are not usually addressed properly. The plastic corflute construction of the most commonly used types these days is sometimes a significant litter problem.

Plastic is one of the more obnoxious kinds of litter. Paper breaks down fairly quickly. Metal cans and glass are relatively inert (and more or less natural). Plastic, however, does not break down easily but nor is it inert. We know from many news stories now that it breaks up into micro-particles which can enter the food chain and may cause all sorts of problems.

There’s a lot of sources of litter, but environmental efforts like revegetation shouldn’t be one. And yet… they are. A lot of revegetation happens along waterways, in the flood zone, because that’s where you can’t clear for housing and other purposes (yes, as usual, ecology only gets what no-one else wants). What happens when it floods? Tree guards washed downstream. END_OF_DOCUMENT_TOKEN_TO_BE_REPLACED

I'm a botanist and bush regenerator. This is an blog with a (partial) focus on my local bioregions, on Wadawurrung and Wurundjeri country. I'm interested in human sustainability as well as natural ecology. Looking forward to an eco-socialist future, or things are going to get much worse.

as the river goes by
Create a free website or blog at WordPress.com.